Boys and Girls Club of Fellsmere 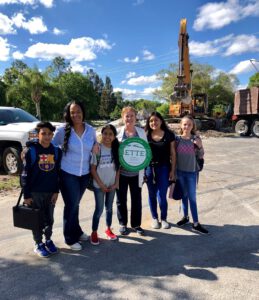 The demolition of the two modular buildings near the 1916 historic old school house in Fellsmere represents a new wave of change for the Boys and Girls Club. The Fellsmere Boys and Girls club was established in 2010 after the community realized the need for a space designed for youth to enjoy after school. BGC shared space in the basement of the old school house and in one of the modular buildings. Unfortunately, after the past two hurricane seasons, the club had to close off its space at the Fellsmere community for six months, due to flooding. Operating with only half of their space limited the amount of children they were able to serve. Elizabeth Thomason, executive director, and long-time supporters Larry and Karen Mulder, decided to initiate a long-term solution by kicking off a campaign to build a new space for the Boys and Girls Club of Fellsmere. Indian River Community Foundation had the pleasure of delivering a $50,000 check from a generous client who chose to remain anonymous. To learn more about great organizations that are impacting and improving the lives of youth in Indian River County, visit www.ircommunityfoundation.org and click “Nonprofit Search.”