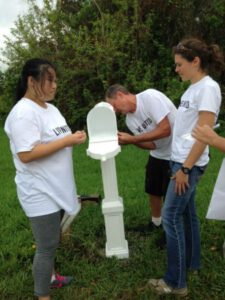 The United Way is counting on the Indian River County community to raise $3.04 million during its annual fundraising campaign.

The goal was announced Oct. 14 at the group’s annual Day of Caring breakfast at the Freshman Learning Center. This year’s campaign will be led by a team from Marine Bank and Trust, including Bill Penney, Kim Prado, Mary Cone and Georgia Irish.

“It’s a big number,” Penney said. “But we’re confident that with the help of generous people throughout this county, we’ll make it.”

Last year’s campaign raised more than $3.05 million for the nonprofit organization, up from the $3 million it raised in 2015-16. The campaign helps fund health, education and financial programs throughout the county offered through United Way and its partners.

Read more about this effort in this article here.