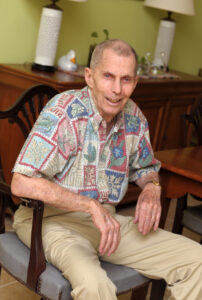 If you were to ask Ralph King why he moved his family foundation to a donor advised fund at Indian River Community Foundation, you might be surprised by his honest answer.

“Laziness! I was tired of all the work that goes along with having a family foundation and looked for a way to ease the burden,” Ralph said.

Ralph lives at Oak Harbor and has been a Vero Beach resident for 35 years coming from Cleveland. He knew this would be the place to retire having vacationed here since he was a young boy. After serving in the Navy for three years, he was an entrepreneur. Ralph was married to his wife, Jane, for 47 years until her death in 1998.

I was tired of all the work that goes along with having a family foundation and looked for a way to ease the burden. Jane and Ralph are well known for their support of local nonprofits. Jane was deeply involved in the Humane Society of Indian River County.  Ralph has always been passionate about the work accomplished through the United Way of Indian River County. His dedication to its mission led to the establishment of the Ralph T. King Lifetime Service Award given annually by United Way to a volunteer who exemplifies Ralph’s commitment to this community.

“My children were not interested in being a part of the family foundation as they live all over the United States. I made the transition to a donor advised fund now instead of leaving it for my family to deal with when I’m gone,” said Ralph. “Through my fund, I can continue to support the United Way, Humane Society and other organizations important to me.”