You are here: Home / Archives for Childcare Resources of IRC

Indian River Community Foundation was established in 2008 with a mission of building a better community through donor-driven philanthropy.  With assets of approximately $90 million in 200 charitable giving accounts, the Community Foundation and its clients have awarded more than $80 million in grants, mostly to nonprofit charitable organizations located in Indian River County, Florida.  Visit www.ircommunityfoundation.org to learn more.

Photo Identifications in this Article:

Childcare Resources of Indian River operates proven programs to elevate and promote the highest quality early childhood development and education in Indian River County, focusing on economically challenged children and families.  According to our Indian River Indicators, from 2017 to 2027 we can project a 27.8% increase in children enrolled in nursery school or preschool in our county.  Childcare Resources provides programs that will impact this increase while ensuring quality education for all enrolled.  Childcare Resources’ Early Education Outreach Coaching Program provides coaching for early educators by helping them first identify goals for their classroom and then implement specific strategies to achieve those goals.  This can provide more children with higher quality early education.

Childcare Resources is also a part of our Endowment Partners Program (EPP).  The purpose of the EPP is to help local charities plan for their long-term sustainability by growing a permanent endowment fund. During a 12-month program, participants learn about endowments, planned giving, investment management and marketing solutions that inspire loyal donors to make planned gifts from their estates. The program is coordinated by IRCF team member Yamilet Cendejas.

To learn how to give outright contributions today or bequests and other planned gifts for future support, please see “Planned Giving: Leave a Legacy” under our “Giving” section or go to the Childcare Resources website. 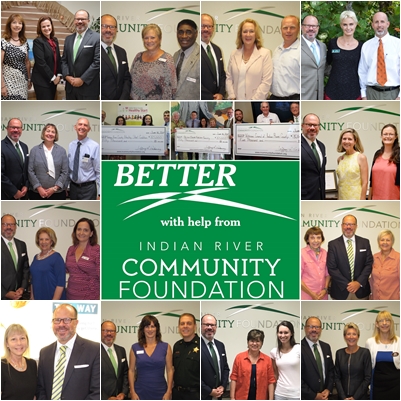 Indian River Community Foundation awarded discretionary grants totaling $405,000 to 15 local nonprofit charitable organizations from its spring 2017 grants cycle. The grants were reviewed by three volunteer grant committees and approved by the Community Foundation’s Board of Directors.

“While most of Indian River Community Foundation’s grants are awarded from clients’ charitable giving accounts, these discretionary grants are made possible by dollars that are entrusted to us to find, fund and follow effective organizations, programs and projects that make our community better,” said Jeff Pickering, President and CEO.

All fifteen grants were awarded from the Community Foundation’s Community Enrichment Fund to address needs in the areas of education, environment or historic preservation as well as needs of vulnerable individuals, families and animals. The following grants were awarded in three categories:

Category 1 – Operating grants for small nonprofit charitable organizations in Indian River County.
• Girls on the Run — $5,000 to support work inspiring girls age 8 – 13 to be joyful, healthy and confident using a fun, experienced-based curriculum that creatively integrates running.
• Laura Riding Jackson Foundation – $5,000 for informational signage and videos to enhance the visitor experience at the late poet’s historic home.
• LifeBuilders of the Treasure Coast – $5,000 to support an intervention effort to provide temporary housing assistance to 10 low-income individuals or families involved with local courts.
• Special Equestrians of the Treasure Coast – $5,000 to be used toward the salary of a riding instructor to teach horsemanship for students with special needs.
• Veterans Council of Indian River County – $5,000 to be used toward efforts to increase visibility of the organization’s mission and programs serving local veterans.

Indian River Community Foundation was established in 2008 with a mission of building a better community through donor-driven philanthropy. With assets of $36 million in 150 charitable giving accounts, the Community Foundation and its clients have awarded $42 million in grants, mostly to nonprofit charitable organizations located in Indian River County, Florida. For more information visit www.ircommunityfoundation.org.

by Jeff Pickering, President and CEO

“You can’t start a fire without a spark.”

These lyrics from American singer-songwriter Bruce Springsteen capture my perspective on one of the best parts of 2016 in my role as CEO of Indian River Community Foundation.   It involves a good grant that became a great grant because of three simple words . . . “Tell me more.”

Back in April, the dedicated volunteers that serve on our Grants Committee convened to review the final list of grant applications that would ultimately be recommended to the Community Foundation’s Board of Directors for approval. In just eight years since the Community Foundation’s inception, this rigorous competitive review had already resulted in 74 discretionary grant awards totaling more than $2 million for programs and projects that make our Indian River County community better.

One of the applications under review was from Childcare Resources, requesting $23,000 for a  project that would provide two professional development workshops for more than 325 early educators from childcare facilities and public schools throughout Indian River County. Compelling data to support the need for this project was submitted in the organization’s application, citing Indian River County’s Children’s Needs Assessment, along with strong evidence of this project’s alignment with the goals of Indian River County’s “Moonshot Moment” literacy initiative.  As presented, this grant was already a “winner” in my opinion.

Our rather streamlined and efficient funding process took a turn, however, when a Grants Committee member said, “Tell me more about how we might make this grant better?” Childcare Resources was invited to submit an amended proposal, which included statistics that the average childcare employee in Florida makes less than ten dollars per hour, and that less than one percent of most local childcare facilities budgets are dedicated to professional development. To make the already-proven professional development project better, the organization requested an additional $45,000 to pay for an in-depth coaching program for early childhood educators who attended their workshops.  The final grant was approved for $68,675 by Indian River Community Foundation’s Board of Directors, and in just a little more than six months, the coaching program is up and running under the direction of Paulette Maggiacomo.

In November, at the Community Foundation’s annual Board retreat, Shannon Bowman, Executive Director of Childcare Resources, spoke as part of a panel of grantees that included Molly Steinwald of the Environmental Learning Center and Angelia Perry of Gifford Youth Achievement Center. Each was asked “How did funding from Indian River Community Foundation make your organization better?”  Bowman responded, “It was the spark that helped take a good project serving early childhood educators to another level, giving those who attend our workshops a resource . . . someone in their corner . . . to help them become a better teacher to some of our community’s most vulnerable children.”

According to most reports, 2016 marked one of the most generous years of philanthropy in American history. The “spark” to light a flame that can illuminate the next opportunity to make a difference in our community may be just three words away.

What’s the “spark” that will ignite your generosity and make a difference in our community in 2017?  Happy New Year!