At this point, I suspect most advisors usually recommend the use of a donor advised fund instead of a family charitable foundation for their clients.

The simplicity and other advantages of the current formation of a donor advised  fund versus the formation of a charitable foundation are often compelling.  However, during the past several months, I have learned that these advantages may be just as  helpful when structuring estate plans that contemplate a future charitable intent.

I have had several clients that wanted to structure their estate plans to provide for the creation of a  trust for the benefit of a close friend or relative for the rest of his or her life but upon that person’s  death the remaining assets of the trust were to be held in a fund focused on charitable works.  While this request sounded simple enough when  first expressed by the client, as I pondered the possible actions that would be required to bring the client’s charitable desires to reality upon the  death of the client’s friend or relative, numerous issues surfaced. First, as the trust for the close  friend or relative was to liberally allow invasions of principal, would the remaining trust assets be  sufficient to justify the trust’s continuation as a charitable trust.

Second, who or what entity would be willing to serve as trustee of this charitable trust which may not come into existence for decades. Finally, significant administrative expenses may be incurred upon the death of the friend or relative to secure an application for exemption from income taxation for the charitable trust to be established  at that time.

Fortunately, I shared my concerns with a member of the Professional Advisors Council for the Indian River Community Foundation, and he provided an extremely helpful recommendation.  Rather than drafting a testamentary charitable trust to receive the remaining assets of the trust  following the death of the friend or relative, instead provide for the creation of a donor advised  fund upon that death or preferably, have the client create a donor advised fund now and direct the  residue of the trust to that fund upon the death of the friend or relative.

This practical solution solved most, if not all, of the concerns that could arise in connection with the creation of a  charitable trust upon the future death of the friend or relative. In addition, simply directing the  remaining trust assets to a donor advisor fund was much easier for the client to understand and to integrate into the client’s estate plan. Finally, the use of the donor advised fund provided the opportunity for an introduction of my client to a representative of the Indian River Community Foundation so that the client’s charitable desires could be properly implanted in his or her new donor advised fund.

If you were to ask Ralph King why he moved his family foundation to a donor advised fund at Indian River Community Foundation, you might be surprised by his honest answer.

“Laziness! I was tired of all the work that goes along with having a family foundation and looked for a way to ease the burden,” Ralph said.

Ralph lives at Oak Harbor and has been a Vero Beach resident for 35 years coming from Cleveland. He knew this would be the place to retire having vacationed here since he was a young boy. After serving in the Navy for three years, he was an entrepreneur. Ralph was married to his wife, Jane, for 47 years until her death in 1998.

I was tired of all the work that goes along with having a family foundation and looked for a way to ease the burden. Jane and Ralph are well known for their support of local nonprofits. Jane was deeply involved in the Humane Society of Indian River County.  Ralph has always been passionate about the work accomplished through the United Way of Indian River County. His dedication to its mission led to the establishment of the Ralph T. King Lifetime Service Award given annually by United Way to a volunteer who exemplifies Ralph’s commitment to this community.

“My children were not interested in being a part of the family foundation as they live all over the United States. I made the transition to a donor advised fund now instead of leaving it for my family to deal with when I’m gone,” said Ralph. “Through my fund, I can continue to support the United Way, Humane Society and other organizations important to me.” 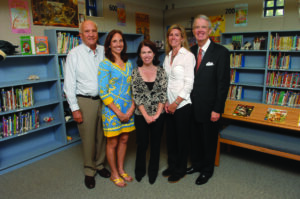 Established in 2009 and eager to move forward with their mission, the founders of The Learning Alliance requested assistance from the Indian River Community Foundation to accept charitable donations while they went through the lengthy process of receiving a 501c3 public charity designation from the IRS. Barbara Hammond, acting executive director and one of the three founders, said they expected to operate independently once they received IRS approval, however the professional support from the Community Foundation has been so valuable at a nominal cost, the Board of Directors plan to continue the arrangement for the foreseeable future.
– The Learning Alliance

We believe you should support the community in which you live through charitable giving. One way to determine how to invest your philanthropic capital is by getting involved to become aware of the needs. And then giving naturally follows involvement.

There is a strong focus on philanthropy in this community. For those who share our belief in giving where you live but are not sure how to do so, we recommend seeking the guidance of the professionals at the Indian River Community Foundation. They love Vero Beach as much as we do.

Dace Brown Stubbs grew up knowing the importance of giving back. This  appreciation for the blessings in life is the legacy of multiple Brown family generations. Dace and the other family members lead by example, finding causes important to them and seeking ways to support programs that effectively address their passions.

Dace considered establishing a family foundation as many of her friends had done. When the Indian River Community Foundation was formed, she learned she could accomplish her charitable giving goals through a donor advised fund with less expense and ongoing administrative burden.  Dace also had peace of mind knowing she would not be adding another responsibility on her children and future generations.  First, Dace and her husband, King, each became Founders of the Community Foundation by making a commitment to support its operating costs for at least the first five years. Shortly thereafter, Dace set-up her own fund at IRCF from which she makes the vast majority of her philanthropic gifts to this community and elsewhere.

“I have found the process of grant recommendations easy and efficient,” Dace said. “I make the funding decisions when the timing is right for me and the Community Foundation staff takes care of the rest.”  Dace has come to Vero Beach since 1985 and been closely involved in a number of organizations focused on education, land conservation and healthcare. She also supports Indian River Community Foundation’s unrestricted fund to ensure she is funding solutions to our county’s most pressing needs.  “My family has loved being a part of Vero Beach. There is so much energy from caring people who only want to further strengthen this place we call home,” Dace said.